After the FCC OK'd separate long distance (LD) companies years ago they came up with a way to let you choose your LD carrier on every call. It's usually called a Dial-Around Code or 1010 code. Sometimes a PIC code.

This time in history was really the beginning of the end of the Bell System. Until AT&T pretty much recreated it. This patch was issued by a telephone hacker group called TAP at a time when the unions were having contract problems with the Bell System, and used this "saying:" 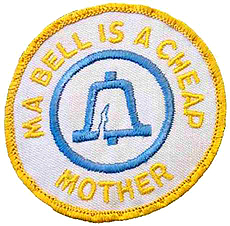 Click the Patch to Visit the sandman.com Telephone History Page


Although the first codes were five digits like 10288 (for AT&T LD), after a while there were so many LD companies that they changed it to seven digit codes, like 1010288 (for AT&T LD). The primary use for 1010 codes today is discount International calling. Local and long distance is so cheap that it's probably not worth dialing extra digits for those calls.

You can search the Internet for 1010 codes for the different LD carriers. There are many.

At the time many businesses had LD service from their local phone company, but competing (cheaper) LD companies would install RJ-31X jacks at the demarc with a "long distance dialer." So while you may have had Illinois Bell for your long distance, Sprint, Allnet or MCI would have installed dialers on all your lines so your calls would go through them.

You can do the same thing today to choose your LD carrier from POTS lines. This is a really good idea for testing when you're having problems, particularly with modems or faxes.

This would also be a good thing to try if you are having problems with a call connecting, but the IVR or voice mail you're connected to doesn't understand the touch tones (after you're connected). Use 1010288 (AT&T) to complete the call instead of whatever LD carrier the line you're calling from is PIC'd to (or try from cell phones or other premises). An LD carrier may be clobbering the DTMF digits after the call is connected (the call connects OK, but the LD carrier may compress or otherwise distort the digits to the far end).

If you're having problems with DTMF digits being recognized when the IVR or Voice Mail is reached through an 800 number , try calling the local number the 800 number points to. The 800 number provider can be clobbering the DTMF digits. If it still doesn't work try calling the local number using 1010288 (AT&T) to see if that helps? If you're calling a fax or modem using an 800 number and are having problems, use the same techniques for troubleshooting.

1010 codes probably won't work on VoIP lines since both local and LD is usually supplied in a per minute or flat rate, so the VoIP provider didn't make any provisions for dial around to a TDM LD carrier. The VoIP carrier figures you don't need it since you buy your long distance from them to save money.

I asked a guy with Uverse phone service to try 1010220 (about a dollar a minute) and 1010288 (AT&T). It said "This call cannot be completed as dialed." It probably won't work on anything other than a copper POTS line, but you can try?

The owner of a good size alarm company called last month saying that his wife had recently gotten a call from a CLEC salesman, was surprised by the savings, and switched all their POTS line to a CLEC (Competitive Local Exchange Carrier). They got a package price on the lines, local calls. and long distance, that was a lot less than from the real local phone company that he had been using for years.

The phone company switched his POTS lines over on-time. But he could no longer dial into his customers' alarm panels to program them (make changes). Both local and long distance calls. Uh-Oh!

I believe he said he had switched from AT&T (his local phone company) to Verizon (a CLEC in his area). It seems like it would be safe to switch to a big name "phone company" like Verizon? Well, it probably would be safe if it was just for voice calls. The quality of the voice calls may be better or worse, but we're all used to crummy sounding voice calls so it's not that big a deal.

If you have fax or modems on the POTS line and they're working, and you still need to use them, you definitely don't want to switch your phone company . That includes switching to a CLEC, a real phone company reseller, a cable company, Uverse, FIOS, any kind of triple play, etc.

If your customer screwed up and made the change to a CLEC or a different LD company on a POTS line, you can use a 1010 code to see if routing the fax or modem calls differently helps. The easiest thing to do is dial 1010288 (for AT&T), then 1 (if needed in your area) and the area code and exchange code (even for a local number).

288 is what you get on the dial pad if you dial ATT using the letters. Easy to remember. AT&T would be a good choice to see if another carrier would help.

Note that there's a company with the 228 code, which you reach by dialing 1010228. That ain't AT&T. I think they're hoping that some of us have fat fingers and dial 228 instead of 288 by accident, and make some money off us.

Any calls dialed using a 1010 code instead of choosing that company for your LD carrier on your POTS line will be more expensive than any other way you can dial. Figure at least 50 cents and probably closer to a dollar for the first minute, and 25 to 50 cents a minute after that with many of the 1010 companies. The charges will usually be added to the local phone bill for your POTS line, the following month.

The guy from the alarm company said that he could communicate with the modems 100% of the time using the 1010288 code on both local and long distance calls, and couldn't at all without dialing the code (it answered, but couldn't communicate).

He said the charges were insignificant to him as long as he could talk to the alarm panels, so he was going to continue to use 1010288 to call the panels. It wasn't needed for normal phone calls and he was locked into a contract with the CLEC. He didn't seem to want to go to battle with them.

His solution was really brilliant. There are no gizmos he could put on the line to correct the problem (except maybe a long distance dialer that would add the 1010 code for him, like the old long-discontinued Mitel Smart1). The way that particular CLEC sent calls over their network clobbered the data. Nothing you can do about that except use a different carrier.

Clobbering the data is understandable since nobody guarantees data on regular phone lines, and while some real phone companies offer something like "Assured Service" (extra cost) that will guarantee 9600 baud (or whatever), no CLECs will do that as far as I know.

Note that if you order FIOS, Verizon will always rip out the copper going to the building in their LEC territories to prevent you from going back to the cheaper copper POTS service (with no triple play). According to a Verizon PR guy you can tell them not to remove the copper when installing FIOS (fiber). Right.

If you're having problems with voice quality, faxes or modems on copper
POTS lines, try the call with a 1010288 in-front of it to see if it works!